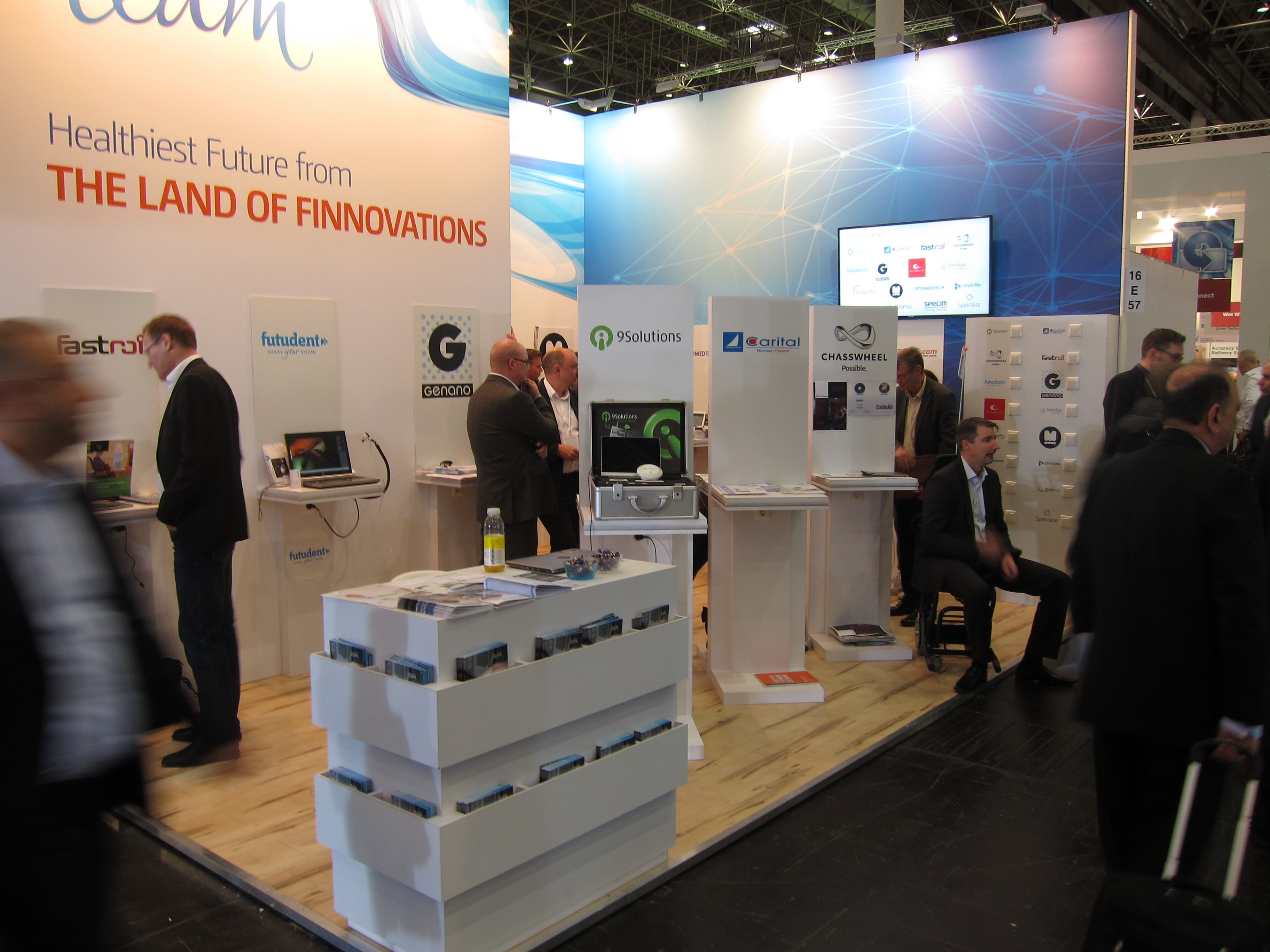 Innokas Medical again participated in the Medica trade fair held in Düsseldorf, Germany, on 16th to 19th of November, 2015. This time Innokas participated the fair at Team Finland’s joint stand for Finnish companies in hall 16, stand E57 which was organized by Finpro’s Team Finland Health growth program. Among Innokas Medical, there were 15 other Finnish companies joining the stand. Päivi Antila, who were representing Finpro at the fair, was very satisfied on the successful event.

“Every year Finpro’s Team Finland Health program participates in few chosen sector specific trade fairs with Team Finland joint stand. One of the chosen ones was the Medica fair last year where the purpose was to offer the possibility to get familiar with the fair and the possibility to use the stand as a meeting point to Finnish companies who was joining the joint stand. We’ve got lot of feedback of the joint stand concept after the fair, and the feedback has been positive. The atmosphere at our stand was wonderful, and it was very nice to notice how the team spirit of the companies joining Team Finland’s stand grew during the fair”, says Antila.

Innokas was represented at the Medica fair by Innokas’ Executive Vice President Tommi Kaasalainen and Account Managers Antti Virtanen and Antti Tolvanen. Virtanen participated the fair for the first time. He feels that participating the top trade fair in the healthcare technology sector is very beneficial to everyone working in this industry. Virtanen also tells that he was even a little bit surprised of the size of the event.

“I participated at Medica for the first time, and I feel that the participation was very fruitful and instructive – even kind of eye-opening as an experience for ones who’s working in the field. I really consider that the participation at Medica was beneficial for us as it’s a very good place to form networks and become familiar with new innovations and trends in the field. The fair was definitely bigger than I expected, and it was very crucial to notice how many competitors and how big masses of new potential customers there are in the international market”, Virtanen thinks.

Kaasalainen was representing Innokas at the fair for the second time. He considers that the exhibition participation was beneficial, and he also endorses the joint stand opportunity Finpro is offering to Finnish companies at the fair.

“Participating the fair with own stand is quite challenging to a service company like Innokas as we don’t have any own products we could launch at the fair. But we’ve noticed that there should be some kind of meeting point to use at the fair. That’s why we’ve moved to use the joint stand opportunity instead of building our own. Using the Team Finland’s joint stand at Medica was beneficial; practicalities of the stand were very well organized, and Innokas had a good meeting point where to meet our customers”, Kaasalainen says.

Tolvanen tells that Medica brought lot of good new contacts to Innokas. He feels that especially the arrangements Innokas sales team made even more carefully before the fair contributed to a very successful fair participation.

“We made lot of new, good contacts at the fair – even more than previous year. I think that it is particularly important to take your time to do all the arrangements beforehand, like book meetings and plan which stands we should visit during the fair. The importance of the pre-event work is emphasized as the Medica is one of the biggest fairs in healthcare sector so it is very laborious to start to plan the activities of the fair days when you’re already there”, Tolvanen says.

The Medica / Compamed trade fair is one of the largest exhibitions in the field of medical technology. The fair is growing every year; this time altogether even 130,000 professionals attended the fair (2014: 128,500). There were altogether 5000 exhibitors at the fair. Medica/Compamed will be arranged this year from 14th to 17th of November, 2016.