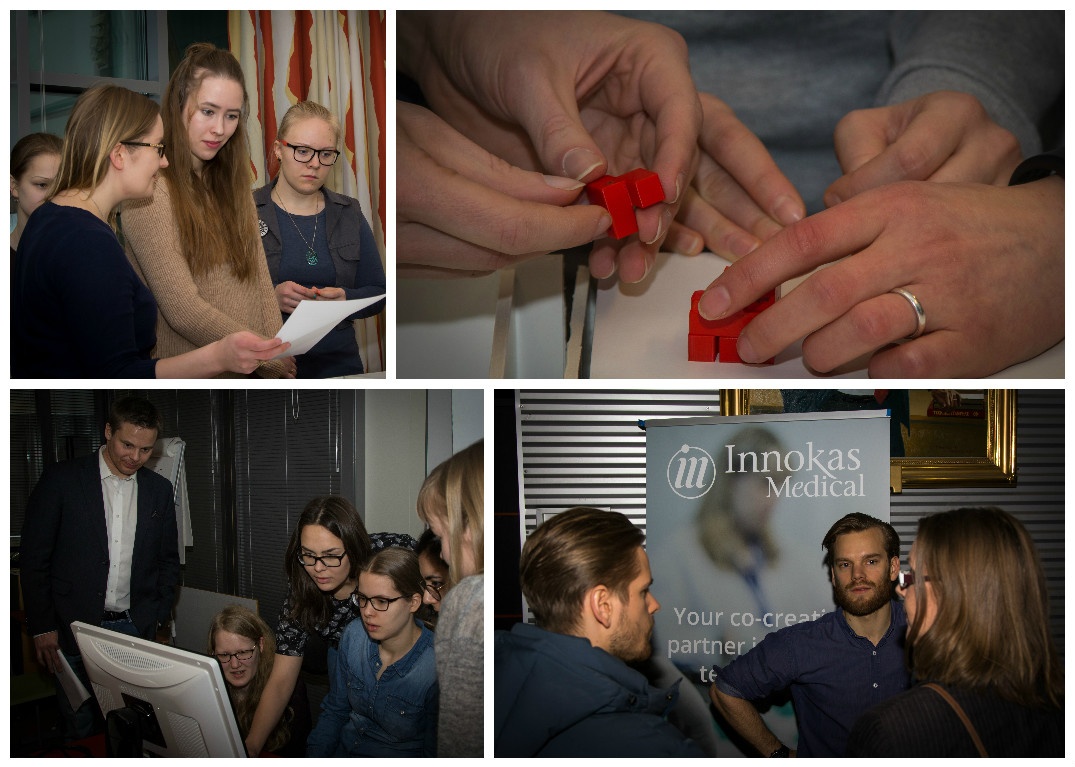 Innokas Medical participated at Yrityspäivät event in Tampere in the beginning of February. Yrityspäivät is the largest networking and recruitment event for university and college students in Finland. The event was organized at the University of Tampere (on February 1st), and at Tampere University of Technology (on February 2nd), gathering altogether over 100 companies and organizations and thousands of students to network and meet each other.

Innokas participated the event on 2nd February at Tampere University of Technology. Innokas had it’s own booth at the event, but arranged also a workshop session for students with Escape Room theme.

“In addition to our own booth, we offered the students a puzzling opportunity to familiarize themselves in health tech business. In our workshop, also known as Escape Room, students worked as a group through the different steps of Medical Device development in only 45 minutes. The students were supposed to e.g. program a robot in order to progress with their path through a maze. As a reward, the entire team received a gift voucher to the real Escape Room”, tells Innokas’ Engineering Manager Jenni Tuulos, who participated the Yrityspäivät event and was one of the main organizers at the workshop.

Innokas Medical’s Mechanical Engineer Robert Ashorn, Software Specialist Tibor Weber and Account Manager Antti Virtanen participated in planning and organizing the workshop with Tuulos. The tasks Innokas’ team scripted to the workshop were not easy at all, but nonetheless, the implementation was a great success.

“The students were very excited about the workshop we arranged! According to the students who participated the Escape Room, the tasks were challenging enough to keep the speed and interest up until the time ran out and all the tasks were solved. I think we managed to implement something different, as the atmosphere at the Escape Room was really excited and enthusiastic. In particular, the dynamics of the teamwork of student groups was interesting to follow during the workshop. The teamwork skills were really put to the test there as the tasks were in some cases a bit difficult”, Ashorn says.

The homework done by the students surprised positively

In addition to the workshop session, Innokas actively networked with the students at Innokas booth at Festia building. Also Innokas’ HR Manager Minna Salomaa and Marketing Manager Elina Rautiola represented Innokas at the booth. There were plenty of visitors throughout the whole day at Innokas booth, and especially the self-imposed attitude of the students’ positively surprised Innokas’ representatives.

“Our booth was visited by lots of younger talents who had prepared themselves for the event quite well: they marketed themselves very professionally, and had looked for our company in advance. That was a nice and positive surprise for us. I think it was especially nice to see how full of enthusiasm and with good capabilities the students are moving from colleges and universities to working life nowadays”, Salomaa says.

Innokas’ representatives feel that participating the Yrityspäivät was a great success. In addition to positive spirit and coverage Innokas had and gained, Innokas was able to discuss with many young, future talents at the event.

“This kind of events are very good from a viewpoint of recruiting younger talents, because during the busy day we had we were able to familiarize us with the current level of knowledge of the young, new talents available. We would be happy to recruit, for example, some younger talents who are finalizing their studies or who are recently graduated, as Master’s Thesis workers or to some suitable trainee positions to grow as senior-level experts within medical device engineering and manufacturing”, Salomaa concludes.